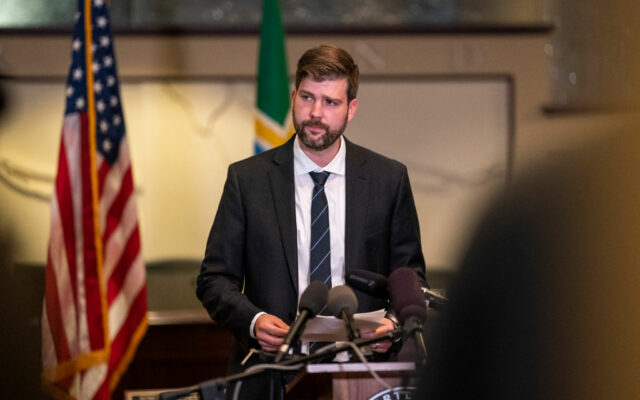 After receiving the following email from a listener, Lars invited her husband Terrell onto the show to explain what happened.

Lars,
This past Sunday morning, my husband checked our on-site cameras at our business in NW Portland. A burglary was taking place. We notified the police and they responded brilliantly. Officers were on scene within minutes and blocked one of the bad guys on our property. 2 got away. They called a canine unit who found the thief hiding in a piece of equipment. He is a convicted felon and was found with a pistol and $10000 cash in his pocket. He was arrested. Later that day his buddies come back. We notify the police and give them a vehicle description. They get pulled over on front avenue but the police have no cause to search but did get their names. We have hours of video showing these guys loading over $50,000 worth of equipment and metal onto our service truck to drive it off. They were stymied by how to get out of our electric fence with the loot. The main officer was confident of our case as we had so much incriminating evidence. He took it to the Portland DA. The Portland DAs office declined to prosecute! The officer was dumbfounded. We were dumbfounded. It seems like the only justice Portland is interested in is Social Justice. What is becoming of our city?!
Enjoy the day

We have followed up with DA Mike Schmidt’s office, and will update this post as more information becomes available.
Listen To The Interview Below:
TheLarsLarsonShow · Terrell Garrett – What Do You Do When The DA Lets People Get Away With Robbing You?
Tweets by LarsLarsonShow