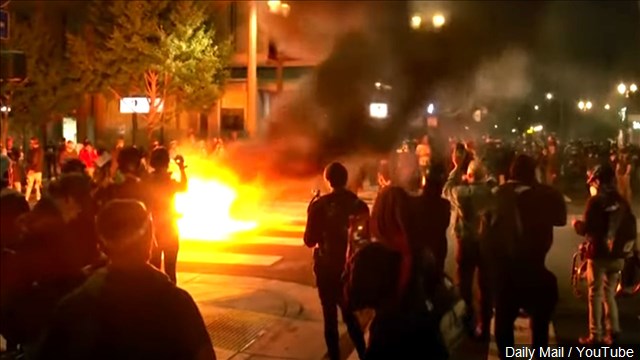 I’ll bet you think I’m kidding. Nope.  His very words, I’m quoting here, “I’m not asking people to physically defend themselves or defend their property.  That is the purview of the police.”  Ted Wheeler, April 23, 2021.

So, when Antifa and BLM come to bash your head in or burn your business down, call the police.  Officers will be there in minutes to make arrests if your assaulters or arsonists stick around for that.

You’ll likely be on the way to the hospital or the poor house.

Feckless Ted Wheeler shows all the signs of a very slow learner.

For years, Antifa and BLM have done heavy damage to the city where voters chose Wheeler as its leader.

But on Friday the light bulb over Ted’s head finally went on.  He told reporters, “They want to burn,” Mayor Ted Wheeler said. “They want to bash, like they did to the nonprofit Boys and Girls Club in Northeast. Really they want to intimidate. They want to assault.”

Thanks Captain Obvious.  Someone like Ted’s new 110-thousand dollar a year assistant, failed mayor Sam Adams, should pull Ted aside and let him know that a lot of us figured that out a long time ago.

Or the night Antifa murdered Aaron Danielson as he walked though downtown.