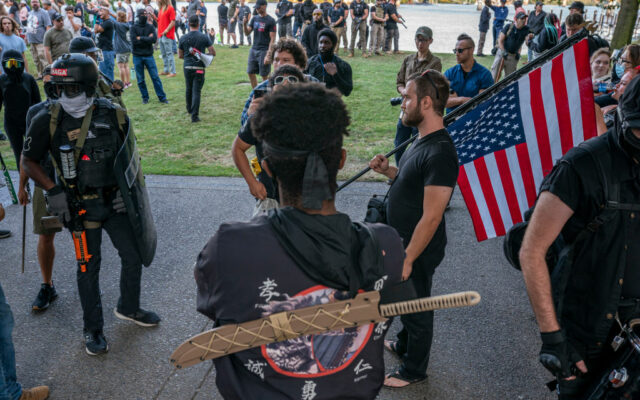 A Christian group found itself under attack by Antifa in Portland’s waterfront park on Saturday and when they called for help from police, none showed.

Flash bangs, pepper spray and plain old projectiles were the weapons of choice for Antifa terrorists assaulting the group “Let us worship”.

It seems that Portland allows hate crimes if you attack the right group.

If someone leaves leaflets at a Muslim Mosque, police launch a full investigation.

But Christians are fair game.

Fortunately, people of faith don’t back down.  Yesterday “Let us Worship” brought an even bigger group of people for a rally…and this time, the size of the group intimidated Antifa…who stayed at a distance…but communicated their plans by social media.

Northwest politicians constantly talk about civil rights but as in George Orwell’s “Animal Farm”…all are equal…some are MORE equal than others.

Our elected leaders have no backbone.  They claim the right to make all kinds of decisions for us…and force us into other decisions against our will…but when it comes to protecting our rights…the oaths they took…they’ve abandoned us.

At some point citizens will decide…when the government refuses to protect you, you just have to do it yourself.