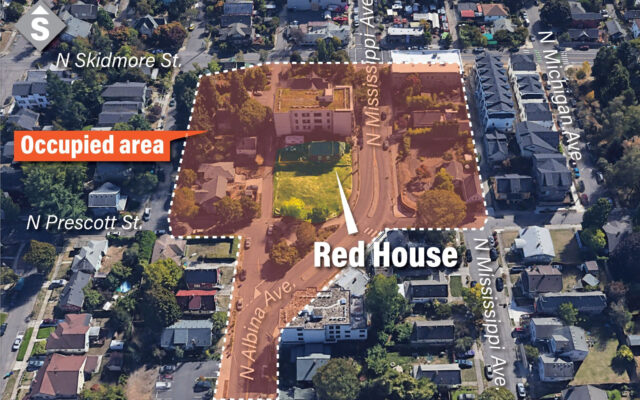 When it began four days ago, the Mayor vowed that “no autonomous zone would be allowed in his city” and that “all legal means” would be employed to remove it.

Today, the RHAZ…or Red House Autonomous Zone…now occupies five city streets and has been in control for the better part of five days.

Last night, Mayor Wheeler backed down from “not allowed at all” to “active monitoring”.

So the same Harvard educated millionaire who let riots run wild in his city for six months has evolved his position to that of sideline spectator for the armed takeover of a neighborhood.

When Seattle did that with the CHAZ…it ended with two murders, rapes and assaults.

The Mayor promises that all city departments will be employed to find a solution.

Yep, I’ll bet the Parks department and the Sewer bureau will be lots of help.

The conservative group Oregon Catalyst has provided pictures of the arms already lined up for this fight.  Activists have erected barricades….and piled up rocks, bottles and tire spikes for the fight.

Don’t expect this to end anytime soon…and don’t expect much from the so called leader at city hall.  But you can count on him monitoring it from a safe distance.  Safe for HIM:  not so much for people who live in the RHAZ