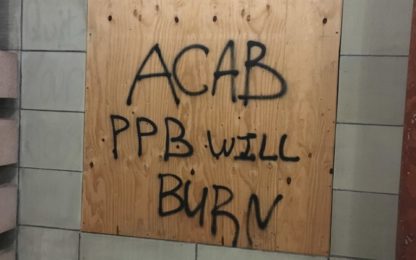 Anyone with a brain gets the strategy: Riot till someone dies.

In Seattle, rioters Monday night tried to trap police inside the East Precinct building and set it on fire.  Video proves that.  Police call it attempted murder and I agree.

Two people died in rioting last night in Kenosha, Wisconsin after police shot a man Sunday.  Jacob Blake fought with police, resisted arrest, may have had a knife, and was reaching into a vehicle as officers pointing guns ordered him to stop.  That’s a threat.  The law says police confronted with a threat may use deadly force to stop the threat.  They did.

In Portland, a frontal attack on City Hall, home of Snowflake Mayor Ted Wheeler…who ordered police to stand down in July and stop enforcing the law.

Rioters vandalized walls and floors with slogans Portland Police will burn, all cops are bastards, you started this war, we will finish it

Rioters get the message.  Break things, burn things, and hurt people till someone says “enough”.

I’ve had enough.  If you want an answer, the police chief in Dallas, Texas, a black woman told her officers to arrest 700 people.  That put a stop to it, nearly 3 months ago

Enforce the law.  Prosecute criminals.  Do your job