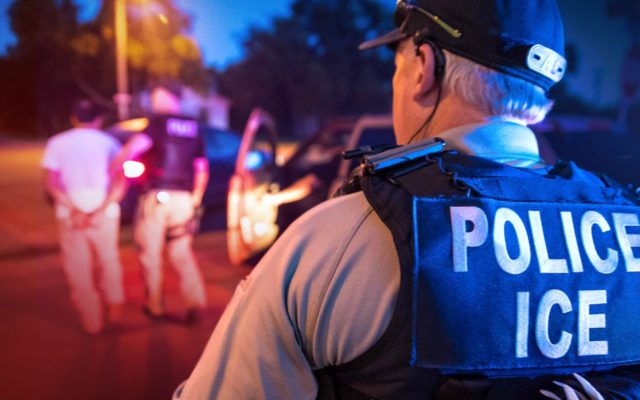 It has been an interesting last second week in the month of June when it comes to criminal aliens (illegal aliens) here in the Pacific Northwest states of Oregon, Washington and Idaho.

This week we take a look at for your Pacific Northwest radio listeners at a criminal illegal alien previously removed multiple times from the United States who was recently arrested and charged with drug crimes in Jackson County, Oregon.

During the traffic stop, the OSP Trooper noticed signs of criminal activity and consent was given to search the Sentra.

A search of the vehicle uncovered approximately 16.3 pounds of suspected heroin hidden in the gas tank of the car.

Consequently, Victor Aguilar was taken to and lodged in the Jackson County Jail in Medford, Oregon.

Victor Aguilar has been charged with Unlawful Possession of Heroin and Unlawful Delivery of Heroin.

An important fact, as of Friday, June 4, 2020 Victor Aguilar is no longer in the custody of the Jackson County Jail.

Repeat immigration violator, Victor Manuel Castro-Aguilar, 33, is a citizen of Mexico and in the United States illegally. Castro-Aguilar illegally entered the U.S. without being inspected, admitted or paroled by an immigration official and was removed to his home country in 2005. He illegally entered the U.S. a second time on March 2, 2010, where he was encountered by U.S. Border Patrol and was prosecuted for illegal entry to the United States. Castro-Aguilar was convicted in the U.S. District Court for the District of Arizona for illegal entry, sentenced to time served and removed to Mexico on March 23, 2010.

Castro-Aguilar illegally entered the U.S. a third time, was encountered by U.S. Border Patrol, and removed back to his native Mexico in 2017. On June 2, Castro-Aguilar was arrested for unlawful possession and unlawful delivery of over 16 pounds of heroin in Medford, Oregon. U.S. Immigration and Customs Enforcement’s (ICE) Enforcement and Removal Operations (ERO) lodged a detainer on Castro-Aguilar with the Jackson County Jail, June 3. The Jackson County Jail failed to honor the immigration detainer placed by ICE and he was released back into the community after posting bond. – Alethea Smock, ICE Public Affairs Officer.

Under federal law, ICE has the authority to lodge immigration detainers with law enforcement partners who have custody of individuals arrested on criminal charges and who ICE has probable cause to believe are removable aliens. The detainer form asks the other law enforcement agency to notify ICE in advance of release and to maintain custody of the alien for a brief period of time so that ICE can take custody of that person in a safe and secure setting upon release from that agency’s custody. Yet, across the United States, several jurisdictions refuse to honor detainers and instead choose to willingly release criminal offenders back into their local communities where they are free to offend.” – ICE Public Affairs.

To repeat a rhetorical question from the May 7, 2020 “Criminal Alien of the Week Report”, if state and federal law enforcement agencies like the Oregon State Police and ICE’s Homeland Security Investigations can support and cooperate in public safety / national security operations, why isn’t the Jackson County Sheriff’s Office that is responsible for the operations of the county jail a part of the previously mentioned cooperative law enforcement team?

Furthermore, on June 9, 2020 the “Criminal Alien of the Week Report” made a phone call to the office of Jackson County Sheriff Sickler and left a message to discuss the release of criminal illegal alien Victor Manuel Castro-Aguilar.

In an in depth telephone conversation, Sheriff Nate Sickler explained that Victor Manuel Castro-Aguilar had bailed out of the Jackson County Jail just like any other prisoner who has the financial resources available to him/her.

Sheriff Sickler shared the problem of jail overcrowding and the failure of a ballot measure to fund a larger county jail; moreover, how the sheriff regretted having to release thousands of prisoners from the jail over the last three years.

At the close of our June 10, 2020 telephone conversation, the “Criminal Alien of the Week Report” asked Jackson County Sheriff Nate Sickler to provide a short statement on the release Victor Manuel Castro-Aguilar from the county jail.

“This individual was released from custody after he posted bail. We are unable to honor ICE Civil Detainers and not have been able to do so for many years. ICE knows this and continues to file these documents. ICE officials also know that we will honor criminal charges if they file them, but they chose not too in this case. This statement from ICE is misleading and does not capture the legal environment in Oregon.” – Nate Sickler, Jackson County Sheriff.