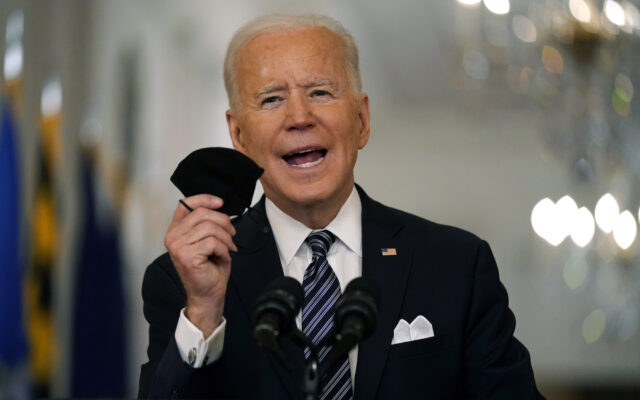 Joe Biden sends some strange signals especially about vaccines and the virus.

Of course, we got some forewarning.  In October, in a debate with Donald Trump, he claimed no vaccine would come till Summer this year.

In January, he promised his advisors would lead with, quote, “science and truth”.

On Friday, Joe Biden walked to an outside press conference wearing a mask to announce that science shows you don’t need a mask outside.

He and wife Jill met with President Jimmy Carter and wife Roselyn last week.  All of them are vaccinated so photos show none wearing masks…that’s science.  Then the president marched back outside and put his mask back on.

Could it be that Joe Biden knows he HAS to endorse vaccination, but he doesn’t believe it actually works?

Biden said so in September.  He declared that he didn’t trust a vaccine developed under President Trump.

Last month during a virtual climate summit, every other world leader had a bare face…except Joe  who insisted on wearing a mask on camera.

That became a political punchline for the day.

Joe claims to follow science.  But this week, the Washington Post broke the news that the CDC wrote its guidelines for schools based on…science?  Nope, teachers unions dictated the rules for reopening.

Or maybe President Biden believes wearing the mask is the only way he can justify trillions in government programs for a country with a vaccine and a strong economy, ready to recover…anytime democrat leaders decide they’re ready