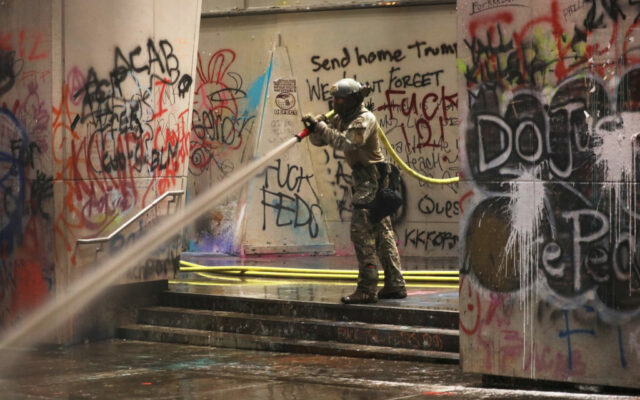 When it was built in the late 90s, the new Federal Courthouse in Portland was the single most expensive new building in the state.

129 million dollars back when a hundred million was still a lot of money.

We gave it the name of a much beloved former Governor and United States Senator, Mark O Hatfield.

Then last summer, rioters tried to set it on fire and do as much damage to it as possible.

Today, it’s a boarded up, fenced off mess.

Mayor Ted Wheeler agreed with the political goals of the arsonists so he did nothing. Multnomah County’s new Social Justice Warrior, Mike Schmidt, also identified with Antifa and BLM and avoided prosecution.

President Trump sent federal law enforcement officers…but then the rioters fought them and even Governor Kate Brown fought that.

Then came the election.  President Joe Biden chose a new top cop…Attorney General Nominee Merrick Garland…who told Congress under oath this week that the attacks on the Portland Federal Courthouse were not domestic terrorism.

Garland explains that attempts to burn the building down would be terrorism if they had happened during business hours.

But because they happened at night, when the lawyers and judges had gone home, he doesn’t see it as terrorism.