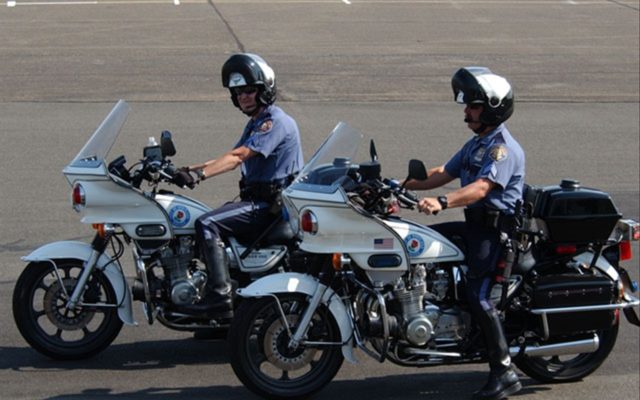 The City of Portland has tied the hands of officers and is not allowing them to protect themselves. City leadership is forcing officers to endure predictable and repeated verbal, emotional and physical abuse.
For more than 5 weeks and with the full knowledge and participation of the City, officers hold the line while projectiles are launched at them including, but not limited to, commercial grade explosives, fireworks, rocks, bottles, bricks, batteries, blades, paintballs, bags of urine and feces, ball bearings launched with slingshots (which at high speeds can be deadly). Several dozen officers have sustained injury.
High powered lasers have been pointed at officers, which can result in permanent eye damage. During this Covid-19 pandemic, officers have been spit on, which poses a serious health concern.
Officers are forced to wait until an “adequate” amount of life-threatening actions have been directed at them before they can declare a riot and deploy crowd control munitions. Oregon state law allows any citizen to use a reasonable amount of force to protect themselves or a third party from bodily harm.
The city has restricted Portland Police use of force to the point of having LESS rights to self-defense than the average citizen.
The City of Portland issued 40 hours of bereavement to all city employees to mourn the death of George Floyd. The city later sent a letter to employees in essence saying people of color should take first priority in the bereavement days because they are more deserving of time off and white employees should make accommodations to fill in for their Black colleagues while they are away. Suggesting a particular group should receive preferential treatment based solely on the color of their skin is blatant racial discrimination.
The city is subjecting officers to hostile and hazardous working conditions. Nightly, officers are met with messages saying they should die, rioters will “kiss their wives goodnight,” they are bastards, they are killers, they are racists, they are pigs, etc. The officers’ repeated and prolonged exposure to traumatic and stressful events under the scope of their employment is taking a major psychological toll and can lead to increased rates of PTSD.
The City Council’s anti-police rhetoric, particularly on the part of member Joanne Hardesty, publicly vilifies PPB officers and creates a hostile work environment for officers by its own city leadership, making their jobs more dangerous. As a result, Portland Police officers have become the targets of doxing attacks, in which their personal information is being shared on social media in a malicious manner.
The complete lack of respect, dehumanization and gross mischaracterization of the men and women behind the badge is disgraceful. These same men and women are members of the most progressive, forward-thinking police department in the nation that agencies across the country attempt to emulate.
Not only are you failing PPB but you are failing the city as a whole. You’ve allowed the disruption of daily life for tax paying, law abiding citizens and business owners who’ve had to deal with constant harassment, loss of income, property damage, and an inability to safely enter or exit their homes and businesses. The Portland Business Alliance estimates the downtown area has lost more than $23 million amid the riots.
Because you’ve allowed insurrection, lawlessness and anarchy to ensue for weeks, you’ve reduced the ability for officers to respond to emergency calls outside of the nightly rioting. Since the riots began over a month ago, the entire PPB Detective Division has been pulled away from their investigation caseload to process the revolving door of nightly arrests. Detectives have no time to process their stacks of cases, leaving victims of homicide, assault, rape, sexual assault, domestic violence, child abuse and robbery without the justice and police protection they deserve.
Shootings in July alone have increased by 240% compared to this time last year, yet Portland City Council voted to dissolve the Gun Violence Reduction Team.
Instead of acting to address the severe understaffing of your police department, Portland City Council has voted to defund $15 million from the police budget as an appeasement to the mob. Various proposals by the city to further debilitate police officers are being advanced, proving city leadership is too anti-cop to effectively govern.
Multnomah County’s policies of no bail/low bail releases are permitting rioters to return to engage in unlawful conduct again and again. Portland City Council needs to advocate for the prosecution to the fullest extent of the law of those responsible for these acts of violence.
Portland City Council is responsible for grave malfeasance. You’ve allowed violence to consume the city in the name of social justice. You continually allow criminals in the street to dictate public safety policy, you’ve caved to domestic terrorists and allowed your political agenda to supersede law.
The Families of Portland Police are calling on city leadership to allow PPB to do their jobs and restore order to the city. City leadership should also condemn the continued abuse and extensive harm against Portland Police Officers.
In the well-known quote by Martin Luther King, Jr. he states: “Injustice anywhere is a threat to justice everywhere”. This is particularly applicable as your bias and prejudice against the police has allowed you to commit egregious injustices to officers and their families, to citizens and business owners.
As elected officials, you should be working to bridge communities not divide them for your own unilateral political agenda. We implore you to examine your own prejudices, microaggressions, aggressions, and bias as you continue to lead.
These are the beliefs and statements of family members. Officers have not had a part in this letter.