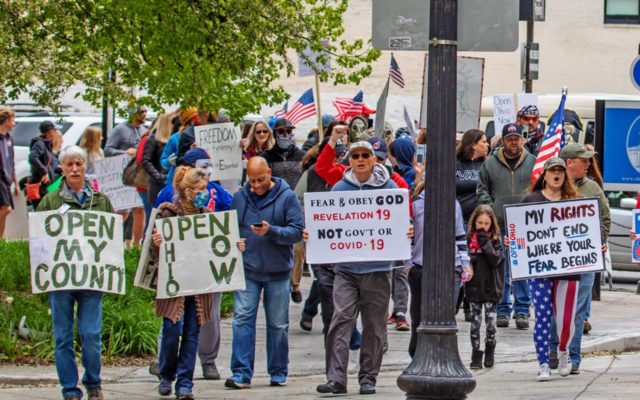 Sensible action to control the spread of a potentially deadly disease.  I can get behind that.  But Lockdown Kate Brown claims the authority to shut down an entire state till the end of time.

You might think I exaggerate.  Far from it.  3 rules control the Governor’s authority in emergencies.  One law and one Constitutional Amendment were written in the 21st century.  Both of them refer to health emergencies including pandemics like the China Virus.  Brown ignored both of those because they limit her authority to 28 days.  If she used those recent rules, her authority would have run out April 6th.  Then she would have to call a special session of the legislature, the people’s representatives, to decide what happens next.

Instead, Governor brown reached back 70 years to a law written for forest fires and floods that makes no mention of disease emergencies.  It has no time limit at all.  In other words, if Oregon runs under that rule, Kate Brown has authority to close things down till the end of time…or ‘till the end of her term in office.

A week ago, a Judge ruled in favor of citizen rights and against the Governor. He found that the Governor’s authority ran out 6 weeks ago.  So, the  Governor demanded the State Supreme Court to back up her endless authority.

Today, Baker County Judge Matthew Shirtcliff, must decide whether to stand up for the law, the constitution and citizen rights…or the endless authority of the Governor who appointed him to the bench.  I hope he chooses the former over the latter.  Today, the state supreme court has ordered Shirtcliff to either abandon his order…or explain why not.

I’m betting Shirtcliff sides with citizens…and then we will see something amazing. Oregon’s attorney general will send citizen funded attorneys to the Supreme Court to argue that citizens must live under Lockdown Brown’s authority forever, with no representation at the legislature until she says so.  Then, seven men and women in black robes will decide how much freedom you enjoy.

Brown has failed this state miserably during an emergency.  She and her husband pulled rank and got tests for China Virus when ordinary citizens could not. She was late to take action to slow the spread of China Virus.  Her state stockpile of emergency supplies ran out in a couple of weeks.  Her confusing communication included a press conference late on a Friday night where she first ordered folks to stay home, then reversed her own order minutes later saying it was only a suggestion.  No surprise, citizens ignored it because they didn’t know what she was asking.

Her agency failed to send timely unemployment checks to hundreds of thousands of jobless citizens.  She rarely leaves her bunker to take questions and even when she does, her staff carefully curates only softballs for Kate’s consideration.

I hate to tell you this, but as we sit today, we are stuck with the China Virus for the foreseeable future and we’re stuck with Kate Brown till January 2023.  It’s hard to say which one scares me more.