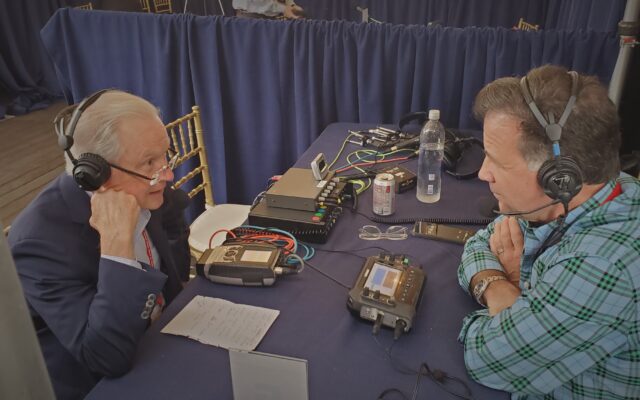 Lars along with many other national and local talk radio hosts across the country are broadcasting live at the Federation for American Immigration Reform’s (FAIR) 15th ‘Feet to the Fire’ radio row; in what has become the largest annual gathering of talk hosts in the country to send a message to Congress and to President Joe Biden that America’s immigration needs to be fixed.

Here’s a recap of all the interviews Lars conducted on the second day:

Ben Bergquam – What are your carpet shoes all about?

Dale Wilcox, the executive director and general counsel for the Immigration Reform Law Institute, comes on to answer: What chance do the Martha’s Vineyard 48 have in court?

If Congress shifts, can we get something meaningful done? To answer, Lars brings on Ira Mehlman, the spokesman and media director for the Federation for American Immigration Reform (FAIR).

Jeff Sessions – Are illegal aliens an existential threat to the country? PT 1

Jeff Sessions – How should we vet possible legal immigrants? PT 2

Jessica Vaughan, the director of policy studies at the Center for Immigration Studies, spoke with Lars about what’s immigration like from the side of processing visa applications.

What’s it like with a ranch on the Arizona and Mexico border? John & Jobeth Ladd are Arizona cattle ranchers, whose property is often the entry point for illegals crossing into the country.

Mark Morgan, the former Chief Operating Officer and acting Commissioner of U.S. Customs and Border Protection, and a visiting fellow at the Heritage Foundation, speaks with speaks Lars to answer: How do we get people to see the immigration problems when the white house can’t?

Tom Homan, the Former Acting Director of Immigration and Customs Enforcement (ICE) tells Lars how we could fix the 3 “border loopholes”?