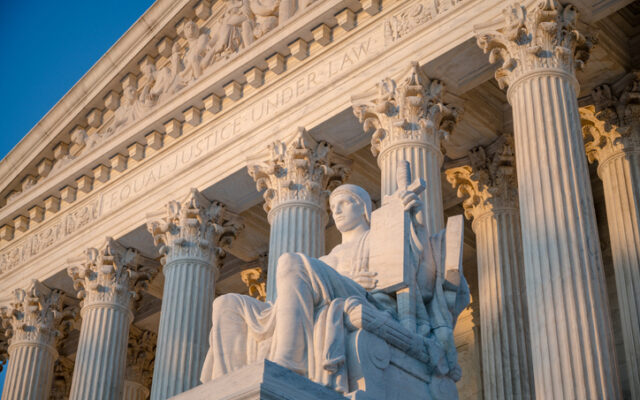 Exterior of Supreme Court of the United States on First Street in Washington DC, USA with statue by James Earle Fraser titled Authority of Law (1935)

“If abortions aren’t safe, then neither are YOU”.

THAT’S the graffiti painted across the entrance to ONE of the more than 20 pregnancy resources centers around America that have come under attack in just the last month.

These centers do good things. They offer young pregnant women an alternative to aborting their babies: They offer real help, so that the new mom can give birth to her baby and then either keep it and love it or give it up to the endless list of families waiting to adopt.

But the pro-abortion crowd hates that idea. They hate it enough that they want to destroy people who only want to preserve life.

They promise what abortion activists now call “a summer of rage”.

Now, the FBI warns those who commit such crimes may face federal criminal charges.

The FBI ignored the last Summer of Rage, two years ago, when Antifa and BLM set American cities on fire and did billions in damage.

Later this week, the Supreme Court overturns its most serious mistake…Roe V Wade.

When it does, the same folks who want unbridled authority to kill innocent babies seem likely to turn their rage against those of us who defend life.

You can read the story here: https://www.kptv.com/2022/06/11/suspicious-fire-causes-significant-damage-gresham-pregnancy-center/