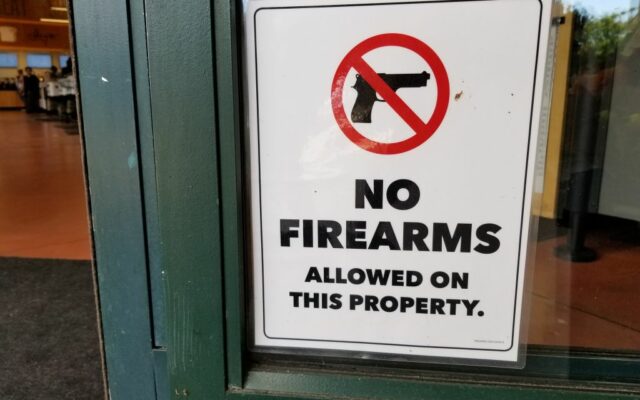 Sign with text reading No Firearms Allowed on this Property, with a handgun in a red crossed circle, indicating to concealed carry permit holders that carrying of firearms is restricted, on a retail store in San Ramon, California, July 21, 2019. (Photo by Smith Collection/Gado/Getty Images)

I’ll bet you thought that your Constitutional rights applied everywhere.

Funny thing, I did too.

Only the 9th Circus Court of Appeals in San Francisco says they don’t.

I call it the Circus court because The Supreme Court, which holds the final say on all things Constitutional, overturns the wacky decisions of the 9th more frequently than any other court in America.

True to form, yesterday the 9th Circus ruled that your 2nd amendment right to keep and bear arms only applies inside your home.

Step outside and your rights evaporate…at least according to the 9th.

The majority opinion of the court says citizens…at least those unlucky enough to live in the 9 Western States where the 9th holds sway…have no Constitutional right to carry a gun for self defense…unless you’re carrying it from your bedroom to the bathroom to the living room and maybe to your kitchen.

Four dissenting judges point out that the 2nd amendment guarantees the God given right to keep AND BEAR ARMS.

Judge Dairmund O’Scannlain, one of the few sane members of the Court points out “We now become the first and only court of appeals to hold that public carry falls entirely outside the scope of the Amendment’s protections.  He adds that this decision “”reduces the right to ‘bear Arms’ to a mere inkblot.”

You have to applaud Judge O’Scannlain for keeping his sanity while serving in the “cuckoo’s nest” of the 9th. Let’s hope the Supremes overturn this one fast.