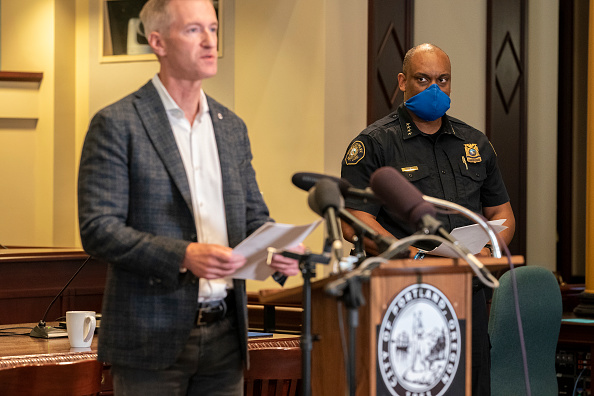 At some point Portland Mayor Ted Wheeler’s stalling and equivocation is gonna catch up to him.

The Antifa-friendly Riot City has lost as many as 150 cops in the past 18 months.  Most of that loss came from retirements while some officers left because they know city hall doesn’t support them.

Now, the city has seen more than 1-thousand shootings just this year and more than 75 murders…most of them committed by gangs.  City Hall doesn’t want to go after those gangs because they’re nearly all made up of gangsters of color.

That would not fit the Wheeler Woke agenda.

Last summer, Wheeler himself bragged that 12 million bucks had been cut from police and gifted to something the mayor called “communities of color”.  No one, including Feckless Ted explains exactly WHAT those dollars buy…except for breathing room down at city hall.

Having cut 12 million, Ted now proposes to add 7 million back.  Do the math.  We are under water from a cops & violence standpoint and Ted proposes we drown 5 feet below the surface instead of 12.

He’s promising to add 300 cops over the next three years…which is Wheeler’s way of kicking the can down the road toward the end of his current term of office.

If voters and citizens fall for this Stanford Scam artist, we only have ourselves to blame