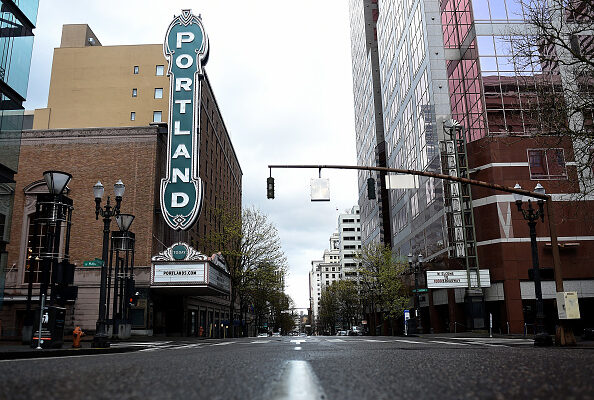 Maybe Portland’s business community has had its fill of the massive homeless problem created by City Hall.

Multnomah County alone will spend more than a quarter of a billion dollars on homeless programs this year.

Portland has spent nearly a billion in the last ten.

Yet the more the government spends, the worse it gets.

Most of these people are on the streets because of drug and alcohol addiction and nearly all engage in antisocial behavior like assault and theft.

Real estate mogul Jordan Schnitzer has put millions of dollars of his own money…not tax money…into successful programs like the Bybee Lake Hope Center, housing hundreds of the formerly homeless.

But I think Schnitzer has had it “up to here” with City Hall’s fecklessness.

He has a building in a trendy part of NW Portland that can’t get tenants because of homeless encampments.

So, in notoriously bicycle-friendly Portland…he installed bike racks…the entire length of a block in front of his building.

It keeps the campers away.

Bureaucrats challenge “he didn’t get a permit”. I say “So what?”.

The homeless don’t get permits to use the streets for a toilet, to shoot drugs, and start fires.

They don’t have permits to block sidewalks and assault and harass the law abiding.

I kind of hope city hall throws down a challenge to Jordan Schnitzer.

This is the guy with the resources and the guts to take ‘em on.

I have no doubt who will win that fight.