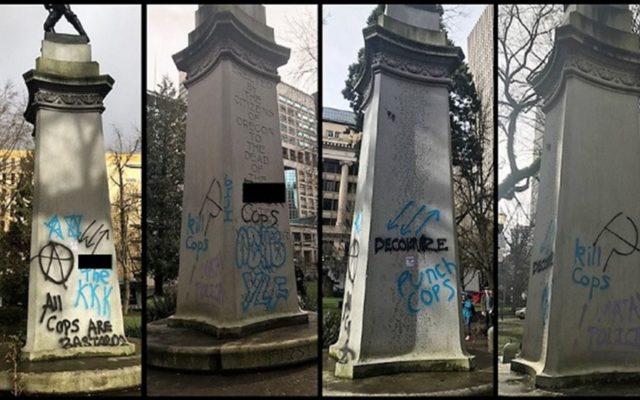 The domestic terrorism group Antifa resembles the Coronavirus.  No one knows where it comes from nor its actual purpose if any. It just shows up and looks for something to attack.  This weekend, Antifa announced it would counter a Ku Klux Klan rally in Portland. Did the Klan show up in the Rose City with its anti-black, anti-Jew, anti-American nonsense?  Nope. Even the Daily Dead Fishwrapper Oregonian admits there were only rumors of a Klan rally. Still, Anti showed up in force, dressed in black and faces masked…and as always…armed and ready to fight.  When the rumored Klan failed to materialize…like the Coronavirus, Antifa began threatening people and destroying property…same as always. One man, who I’m going to speak with later on my talk show, watched from the other side of the street, right in front of police headquarters…a safe place you think?  Far from it. The mob assaulted him…and when he appealed to the police officers, they told him on tape…” we’re not going to come save you so you better go somewhere else”. You think the cops would tell gay rights or black lives matter members that kind of thing. But Antifa holds a special status with the police…because the police commissioner is Mayor Ted Wheeler.