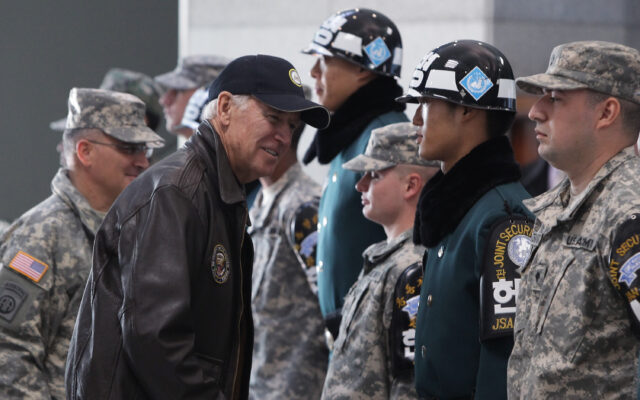 To view the original article at Military.com click the link HERE.

Scott Hogenson served as deputy assistant secretary for public affairs at the Department of Veterans Affairs from 2005 to 2007 and is a Navy veteran.

The American military has a long relationship with bad language. George Washington observed in his general order of Aug. 3, 1776, that the “foolish and wicked practice of profane cursing and swearing, a vice hitherto little known in our American Army, is growing into fashion.”

My introduction to military swearing was at 0330 hours on the first day of Navy boot camp. A chief strolled through the barracks whacking a galvanized garbage can with a bat and loudly demanding that we grab our socks after dropping a thing that rhymes with “socks.” Over the next six years, I learned very many bad words and phrases in the fleet.

Academics have theorized that cursing helps one endure pain, so swearing may be something of a refuge for military personnel. Others believe military swearing communicates a sense of urgency in combat or other critical situations. Gen. George Patton took it a step further, declaring, “You can’t run an army without profanity.”

The panoply of profanity includes hundreds of vulgarisms and curses, among them the word “bastard.” It’s one of the lesser invectives in military parlance and over time has become a badge of honor. The men who defended the Philippine Islands in the early days of World War II became known as the “Battling Bastards of Bataan.” In the European theater, members of the 101st Airborne were called the “Battered Bastards of Bastogne” during the Battle of the Bulge. Members of the 2nd Battalion, 4th Marines, proudly call themselves “The Magnificent Bastards.”

So what’s the problem with calling service personnel “stupid bastards?” Joe Biden did this while serving as vice president during a 2016 visit to an air base in the United Arab Emirates. The remarks were not made in private or alleged by nameless persons but spoken directly to American troops and captured on videotape. To the extent the media have noticed this event, much coverage has focused on how his quip is “missing context.” I concur.

There is a fellowship within the military, often born of hardship, which creates the strongest of human bonds. This gives license to communicate in ways that are not necessarily appropriate outside that fellowship. Language is occasionally coarse and often spoken in jest. As to the word bastard, its primary function is to emphasize a higher level of privation and is most often modified in a complimentary manner. Hence, a battling or battered or magnificent bastard is one whose perseverance is admired, even outside the strict bonds of military camaraderie.

Stupid, on the other hand, is not something anyone wants to be called. There is no circumstance in which calling someone stupid is anything other than an insult. There is no nuance to the word, no compliment or admiration attached to it. Once video of the vice president’s comment surfaced, Biden campaign spokesman Andrew Bates informed The Daily Beast that the candidate made the remark, “jokingly.” I am not convinced of that. During the Sept. 30 presidential debate, President Donald Trump raised the issue of Biden’s remark, and the vice president replied, “I did not say that.”

This response is telling. He could have echoed his spokesman and said, “I was joking,” but he didn’t. Instead, he chose to flatly deny it. It suggests that Biden knows, in retrospect, that what he said was wrong, that it was not a joke at all but something demeaning. It’s reminiscent of when John Kerry told a group of college students in 2006, “You make an effort to be smart, you can do well. If you don’t, you get stuck in Iraq.” Kerry didn’t deny saying it; he characterized his remark as a “verbal slip,” and soon after apologized.

Of course, Biden has said good things about the military. So has Trump. So has pretty much every mainstream politician of the 21st century. But an unscripted moment in which people putting their lives on the line are belittled to their face by a sitting vice president simply isn’t acceptable. Kerry apologized, Biden should too. The men and women in uniform may be battling and battered and magnificent, but stupid they are not.