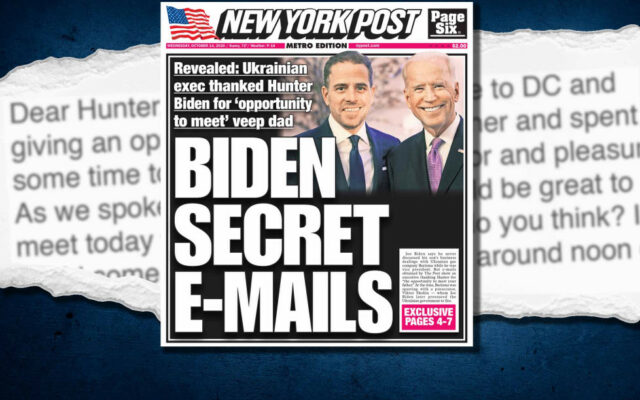 The sleaze oozing out of the Joe Biden campaign is stunning.

Consider what we’ve learned in the last 24 hours.

Hunter Biden, with absolutely no qualifications, made millions serving on the board of directors of a Ukrainian natural gas company

His father, then Vice President Joe Biden, used influence to get a prosecutor fired in Ukraine before he investigated Hunter’s employer

Candidate Joe Biden claims he never spoke to his son about his business.

Yet, the emails released yesterday show Hunter was able to set up a personal meeting between a Ukrainian gas executive and VP Biden

All Biden’s campaign will say is that the meeting was not on Joe’s official schedule.

That’s a laugh.  Your kid scams millions peddling influence to a foreign government. would you put that meeting on your official schedule?

Now these tech giants are apologizing all over the place for trying to engineer the news and affect the election.

I wonder if Papa Joe gets questions about the hunter emails at tonight’s televised town hall…or will the media block that too?

TheLarsLarsonShow · Lars Thoughts – Sometimes, the world of sports intersects with politics and money and riots
Tweets by LarsLarsonShow