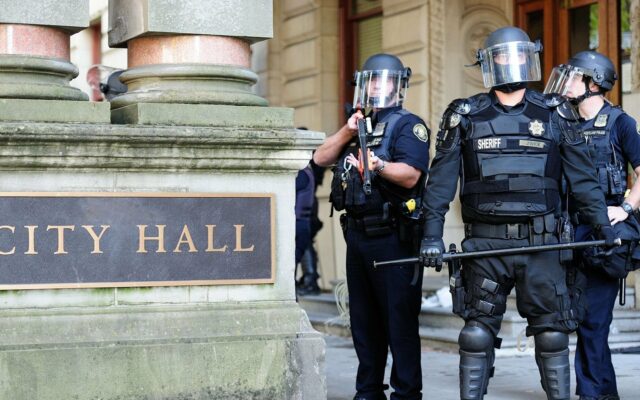 Four months of riots in the Rose City have sent dozens of cops to the hospital.

Rioters use explosives, fireworks, Molotov cocktails, rocks and bricks and even ball bearings launched with slingshots.  Deadly weapons all.

A few weeks ago, the Department of Justice deputized police as U.S. Marshalls.

That means an assault on an officer is a Federal Crime, prosecuted by the U.S. Attorney Billy Williams who has not backed down from the riots.

Now, Mayor Feckless demands that the U.S. Attorney remove the Federal deputy status from his own cops. The only possible purpose…so rioters can again attack the police without fearing prosecution.

He pulled no punches yesterday in his condemnation of city hall/.

The federal deputation supports front line law enforcement officers and their families in a way that they have not seen from City Hall.  Portlanders, and Oregonians in general are sick of the boarded-up and dangerous conditions prevalent in downtown Portland due to a lack of leadership.

Wheeler might as well steal their bullet proof vests.