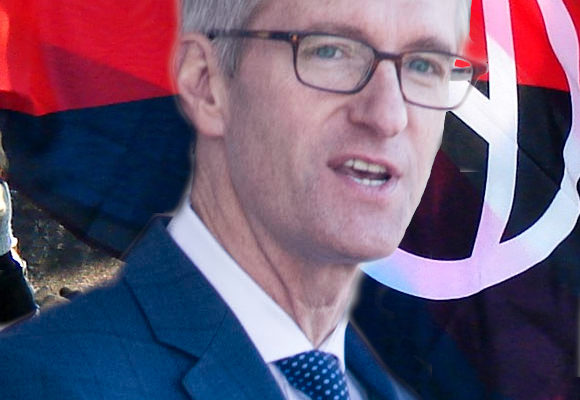 Ted Wheeler made it clear last night how desperate he is to hang onto his job as Mayor of a city beset by riots. He joined the rioters and proclaimed that he stands with them.  Wheeler faces an election just over 3 months from now against a woman who calls herself “the Antifa Mayor”. Quite a choice…Antifa Appeaser Wheeler or Full on Antifa Mayor.

So, last night Wheeler waded into the same mob that has done tens of millions of dollars in damage to his city, the city he took an oath to defend, put his fists in the air and announced that he was one of them.  Just so you understand, when the mayor first arrived, the mob greeted him with profanity “F Ted Wheeler”.

But once Teddy began singing the right tune, they accepted him. Federal officers sent by President Trump have been enforcing the law after more than a month of lawlessness, created by Wheeler’s spineless approach to the riots.

For years, Wheeler has allowed criminal conduct by both Black Lives Matter and Antifa…so this is nothing new.  The Mayor then got gassed along with the rioters and claimed that they did nothing to provoke that kind of action…even as the rioters threw explosives and set fires.

(Reporter Andy Ngo tweeted that the building near where Wheeler was standing “had been set on fire and rioters were throwing explosives.”)

Meanwhile, the most radical member of the city council, Joanne Hardesty, accused police officers of setting the fires and then blaming them on protestors.