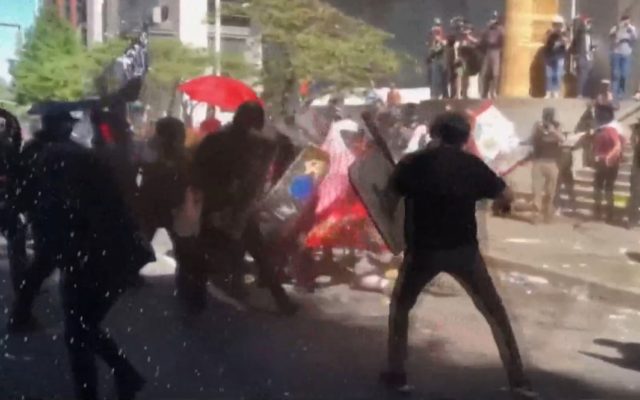 What if they called a riot and the cops didn’t come?  Portland saw the answer to that Saturday as conservative and pro police groups held a rally to “back the blue”.  Antifa, infamous now for almost 90 nights of riots, attacked the group.

The pro-America groups fought back.

Police?  Not so much

The cops have run out of gas.  90 nights of overtime.  Officers sent to the hospital for injuries.  They charge hundreds of rioters with crimes and the new social justice warrior District Attorney, Mike Schmidt, erases those crimes by declining to prosecute

Bags of urine and worse thrown at police officers

The cops face nightly abuse, refusal to prosecute and no backing from feckless politicians like Mayor Ted Wheeler

So, they left the fight to the combatants

If you’re wondering how this ends, I can tell you:  When enough people die.

Seattle tolerated the takeover of a police precinct and a neighborhood…till two men were murdered…including a teenage black American.  So much for Black Lives Mattering.

BLM shut down I-5 in Seattle night after night till one died and another got hurt badly.

I figure this 21st century version of “Mad Max: Beyond Wheelerdome”, continues till someone dies.  And then future former Mayor Ted will clutch his pearls, wring his hands and retreat to his condo.

There’s more, just vote for me on your radio.

TheLarsLarsonShow · Lars Thoughts – What if they called a riot and the cops didn’t come?
Tweets by LarsLarsonShow