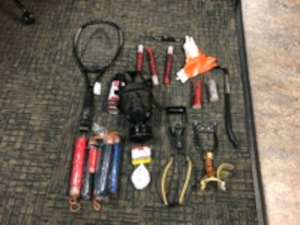 And I’ve heard it hundreds of times.

If we covered news that way, during wildfire season you’d hear the forests are “mostly unburned” and during flood season, towns are “mostly dry”.

At 2am yesterday morning, during a “mostly peaceful” riot, a man shot a Portland Fire paramedic with a potentially lethal ball bearing.

I guess you could describe the medic as “mostly unhurt”.

Thankfully he will recover.

When police arrested 37 year old Jesse Bates in the shooting, you know what HE brought to the “mostly peaceful” event? A crowbar, a switchblade, a gas mask, flares, pyrotechnics, TWO slingshots and lots of glass ball ammo.

Maybe we call him “mostly unarmed”.

He’s been charged with five crimes.

Before you get your hopes up, the Multnomah County District attorney’s office is “mostly unenthusiastic” about prosecuting.

Already the office has dropped charges, including felonies, against five dozen of these criminals, so don’t hold your breath