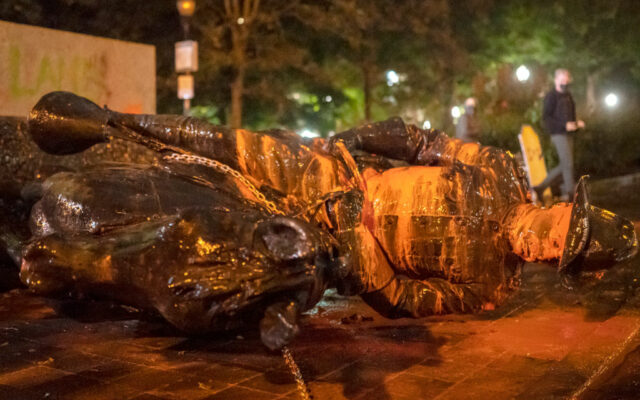 I really hate to fault the cops but I understand they have dimwitted politicians giving them marching orders.

It made national news when Portland rioters pulled down statues of American Presidents Teddy Roosevelt and Abraham Lincoln over the weekend.

Police admit they knew about the so-called “day of rage” in advance.

How often do police know about crimes before they happen and why not stop it?

These criminals ripped down statues, smashed windows, fired a gun through a restaurant.

And just in case you think this was about racial justice, the rioters stole a quilt created almost half a century ago to teach black history, and then discarded it on the street some distance away.

Four months of sending the message that criminals can get away with anything has worked…they can.  And even when the police know about the crime in advance, they won’t act to stop it.  That’s the kind of sick and twisted stuff you get when politicians see an advantage is wanton destruction.

And when I hear the police declare “we won’t tolerate it”, with all due respect Chief Chuck…you already are…and I expect between now and the election, people will see you tolerate it a lot more.

TheLarsLarsonShow · Lars Thoughts – How often do police know about crimes before they happen and why not stop it?
Tweets by LarsLarsonShow