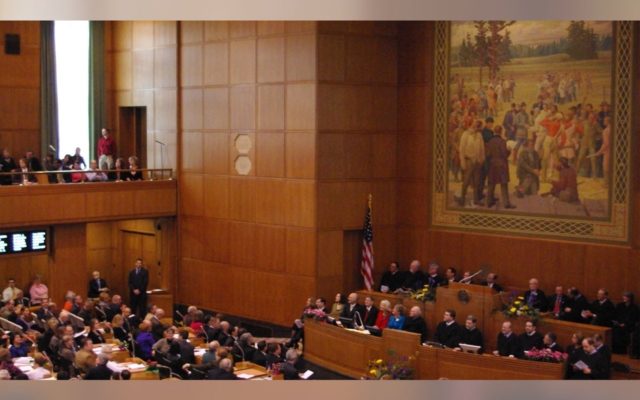 M.O. Stevens
I have to say that the Oregon species of Democrat has amazingly salivary glands. How else to explain how Democrats can spit in the face of voters over and over again…and you kinda expect them to run short of expectorant. The latest lawmaker loogie launched yesterday when the Oregon Senate passed a bill to redefine murder. I know…it’s murder. But remember, liberals have already redefined marriage, life, choice: heck, they claim a wizard ability to redefine boys & girls or even gender itself.
The Senate can’t actually kill the death penalty because voters put it in the constitution. So they redefined the ultimate crime…taking a life.While voters decided one of the available penalties for the worst murders would be death…lawmakers have now written a new definition. And the new one is a doozy. It reads like the instructions for a really complicated board game.
Kill ten people and you can’t get the death penalty. But if a terrorist kills two people he can get the needle, but not always.
Kill one and he sits in prison. If you’re in prison for rape and kill another inmate, no capital punishment.
But if you’re in for one murder already and kill an inmate then you can get death.
But kill some plain old Joe average law abiding citizen and you only get time behind bars.
Under current law, a jury must ask whether the man about to be sentenced is likely to be dangerous after he’s out of prison. That one has been tested in the courts and found constitutionally sound. That question goes away if the governor signs this law. So Johnny Jihad the terrorist could kill two and maim a hundred and sit there in court talking about his plans for future terrorism and the jury will have to ignore it. And don’t forget…whether you favor the death penalty or oppose it…the real question is do you respect the right of the voters to make the laws of the state.It seems likely at this point that this legislature will pass the monstrosity and then send it off to Governor “No Kill” Kate Brown who has refused to enforce existing law for years.You see, the only lives she wants to take are the lives of innocent, unborn babies.
The guilty get to live in the State of Kate.
More about:
attorney
capital punishment
crime
death
Death Penalty
death penalty abolishment
Kate
Kate Brown
Lars
Lars Thoughts
law
lawyers
Oregon
penalty
vote
voter
Tweets by LarsLarsonShow