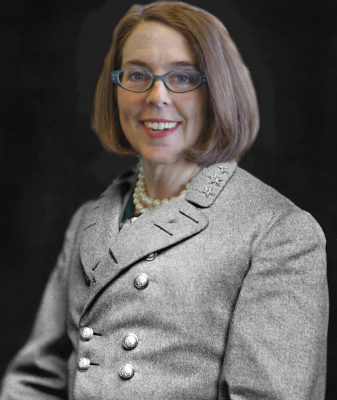 The Oregon State seal has a motto on it, adopted during the civil war.  It reads, “The Union”, announcing the state’s position backing the anti slavery north.

Lately, Kate Brown and Ted Wheeler have adopted a Confederate view of the United States, refusing to recognize the authority of Federal Law enforcement.

Both of these politicians are members of the Democrat Party, the party of slavery.

Arkansas U.S. Senator Tom Cotton amplified this yesterday when asked about the riots and destruction of Federal property in Portland…embraced by these confederate leaders. These insurrectionists in the streets of Portland are little different from the insurrectionists who seceded from the Union in 1861. And just like President Lincoln wouldn’t stand for that, the federal government today cannot stand for the vandalism, the firebombing, or any attacks on federal property.

Governor Kate Brown claims the China Virus gives her absolute authority over citizens in her state…able to order them to do anything she decrees.

Yet, she refuses to condemn the violence and destruction that has gone on for 55 straight nights…and the physical attacks on law enforcement.

She and mayor wheeler demand that federal officers “go home” as though Oregon has already seceded from the Union.