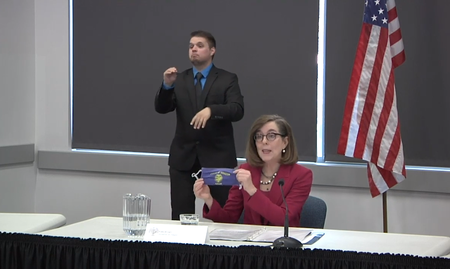 Is anyone else as tired of the mask debate as I am? I’ve explained why I wear a mask when I meet with anyone outside quarantine. Not because Governors Lockdown Kate Brown, or Doofus Jay Inlee tell me to, but for the same reason I wear safety glasses when I fire up my chainsaw.

I think the government lacks the authority to tell citizens what to wear. Too many people, told what to do, will do the opposite even if it’s dangerous because they believe it’s a statement about liberty. But across social media, the great mask debate goes on.

If only we could do what Taiwan has done. The place i was born…the freedom and liberty loving Republic of China…not the plague generating Communist mainland. Taiwan merely asked citizens to do it…they largely left their economy open and you know what? It worked.

As of today, a nation of 24 million…twice as big as Oregon and Washington put together, has seen less than 500 TOTAL cases of China Virus. Oregon reported 389 cases in a single day this week. Washington and Oregon have seen 16-hundred total deaths. Taiwan has only marked 7.

7 people have died since the first of the year. That’s all.

You know I love debate…but I would love most; hearing less mask debate…and more ways to protect people…and get back to something nearer to normal.