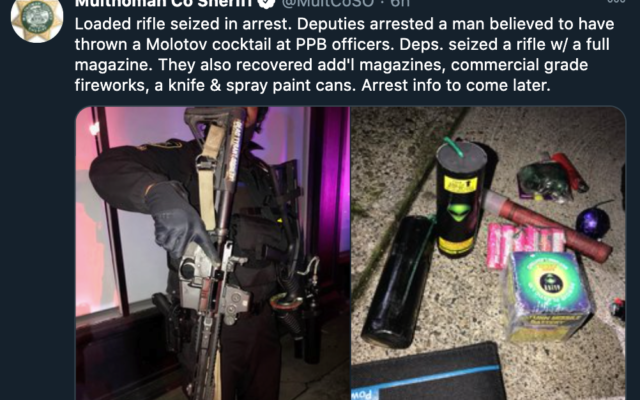 They smashed nearly a hundred windows of businesses…even attacking a church that works with the down and out.

As usual, mainstream media carries water.  The Daily Dead Fishwrapper Oregonlive bizarrely describes a “march that evolved into a riot” .  With that kind of evolution humans would still be still living in caves.

For months of riots leading up to election day, Governor Kate Brown refused to condemn the violence and destruction…and she refused to call up the national guard claiming they aren’t trained to deal with riots.

Last night, Late Kate called up the guard and deployed the so called Unified command…since she stripped Feckless Ted Wheeler of any police authority in the city where voters just re-elected him

At least one of the 11 people arrested was reported to have thrown a molotov cocktail but it turned out to be a firework…which I suppose doesn’t matter much either way if it takes your face off.

He also had a gun with a loaded magazine, but since he’s a member of our most prolific local LEFT WING terrorist group, the mainstream media only called it a rifle instead of an assault weapon.