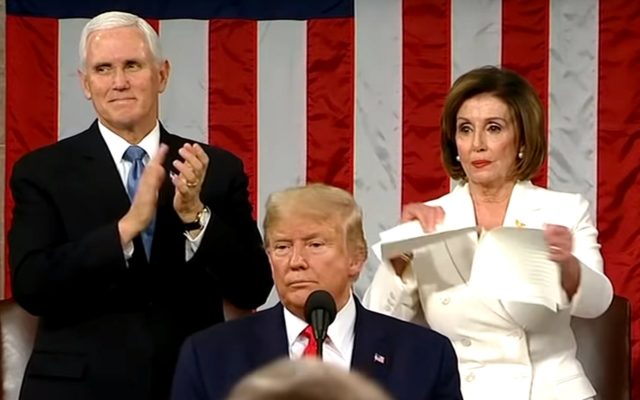 Well, after a brilliant State of the Union address last night from President Trump…a speech so good, Nancy Pelosi felt compelled to rip it up on national television…Donald Trump heads to his next victory…today’s vote to acquit him on impeachment in the United States Senate.  We will see a purely democrat vote in favor of conviction which will fall about 20 votes short or more. We will see a bipartisan vote against conviction where sensible democrats join all Republicans in voting in favor of acquittal. Now I know Nadler and Schiff plan to go for impeachment two-point-oh.  But they should consider that move carefully. This five-month impeachment waste of time actually boosted President Trump’s approval ratings to the highest point since he took the oath of office more than three years ago. It virtually guarantees his re-election in fall…and that’s without the Iowa democrat caucus meltdown this week….and Joe Biden’s increasingly demented campaign antics.  Democrats may get stuck with a full-blown socialism campaign from Vermont Commie Bernie Sanders.

Ripping up that speech last night was a toddler tantrum…unless of course, the reports are true…that Pelosi thought she was ripping up a copy of the U.S. Constitution.

More about:
Pelosi
speech
State of the Union
United States
Tweets by LarsLarsonShow