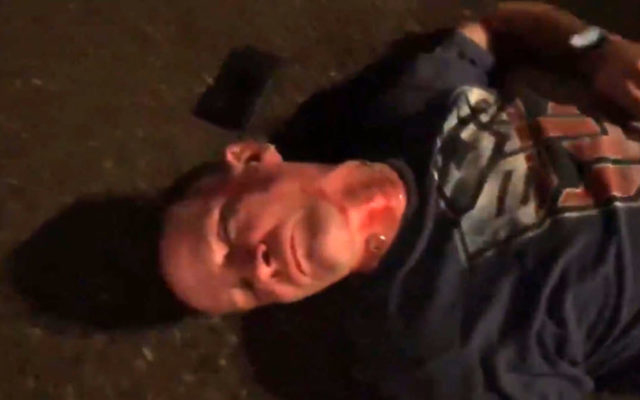 LEAD Technologies Inc. V1.01
Maybe, just maybe, Multnomah County’s Social Justice Warrior, Mike Schmidt, realizes he’s walked himself into a corner. Schmidt assumed office two weeks ago but for months he’s explained how he would avoid prosecuting the criminals who have occupied Portland’s streets.
But now the whole country has seen a man beaten to a bloody pulp by the thugs DA Mike Schmidt identifies with. Roundhouse kicks to the head of a man just blocks from Schmidt’s shiny new office. He ignores that these are the brownshirts of a movement designed to tear down the very system Schmidt heads up.
Late yesterday, Schmidt sent out a statement that begins with a lie, quote: “Assaults will not be tolerated in our community. I condemn this violence.”
Just last week, it was Schmidt, as DA, who announced that he refuses to prosecute 500 separate crimes committed right in front of the courthouse including riot and disorderly conduct.
The riots lead to assaults on officers and citizens like the man beaten down in the street Sunday night. Schmidt signals he won’t punish those criminals but now he says he condemns violence. You can’t have it both ways Snowflake.
Billionaire George Soros surely got his money’s worth when he bought Schmidt his office. Soros has been doing it all over America for years, paying millions to install district attorneys who won’t prosecute criminals. Soros decided years ago that if he couldn’t get legislatures to change the laws, he would just change the prosecutors.
Schmidt plans to let crimes roll right over a city, frees criminals from prison and sends innocent people to the hospital.
He knows that so his condemnation of violence rings hollow. If he doesn’t, then he’s not half bright enough to hold an office as critical as District Attorney.
TheLarsLarsonShow · Lars Thoughts – Schmidt plans to let crimes roll right over a city
Tweets by LarsLarsonShow