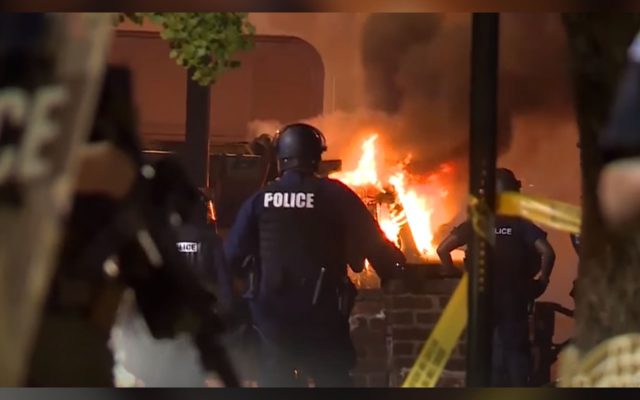 Governor Kate Brown knuckled under to White House demands she take back control of the streets of Portland.  If she does it, and that’s a big IF, federal officers will leave.

I’m sure the citizens in the other 90-thousand square miles of Oregon, who rely on state police in rural areas, won’t mind the extra long response times to real emergencies.

Of course, the violence and destruction could have been solved by Mayor Feckless Ted Wheeler using HIS police…but that would mean the Mayor could not stick with his pro riot position and win reelection in a few months.

In the early morning hours today, the Mayor’s Antifa and BLM allies sent a message they’re not satisfied.  They put a police hat on a real severed pig’s head and set it on fire.

Ah, that’s a reminder of the slogan BLM has chanted for years.  “Pigs in a blanket, fry em up like bacon”

Antifa spray paints ACAB in its graffiti…”All cops are bastards”

If you think the departure of what Kate Brown calls “trumps troops” fixes the hatred for police, you’re mistaken

The war on police continues but remember the Greek Chorus:  It’s all “mostly peaceful” .