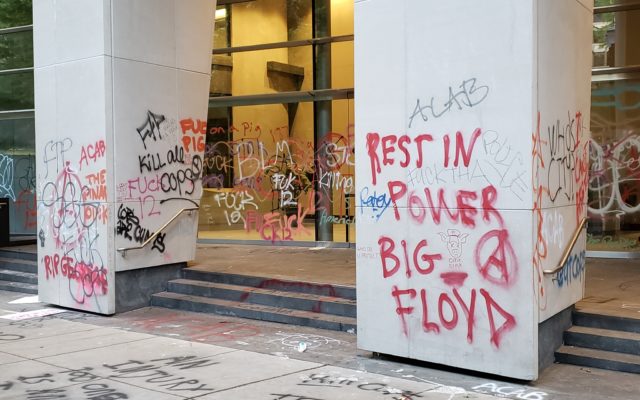 Protests turned to riot and looting and mayhem in literally dozens of American cities for most of this weekend.

In downtown Portland last night, thousands broke the law, attacked police and set fires.   Police arrested only 12 of them.

The police decided to “take a knee” figuratively and literally.

I got a copy of a memo written by Portland Central Precinct Commander Police Mike Krantz supporting and justifying this appeasement.

In the memo, Commander Krantz admits the actions of the lawbreakers justified “mass arrest” .

I understand Minneapolis cops killed George Floyd one week ago

I support the firing of the four cops involved.

I support a murder charge against the officer involved and likely soon against the other fired cops.  National condemnation of George Floyd’s murder from the President on down.

Do Portland police endorse THAT message?

So, exactly what demands do the protestors have beyond that.

Police must enforce the law.  Millions in the Northwest have been told they must absolutely follow new rules…not even laws…about the China Virus or face the consequences.  Legitimate protestors have now allowed criminals to hijack their movement…and that certainly doesn’t honor the life of George Floyd.