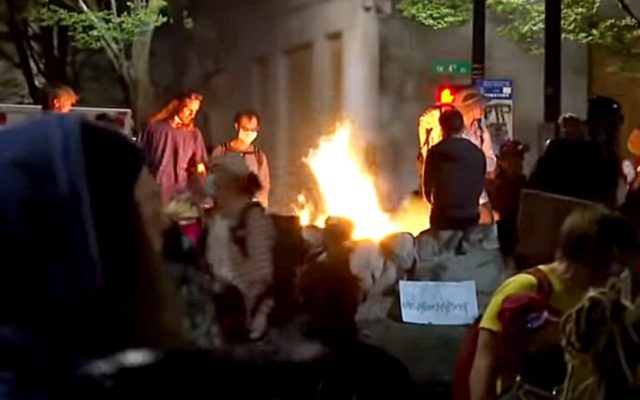 As we come to the end of the week and brace for more riots and destruction in Portlandia’s nightly downtown goat rope.

Even a security detail didn’t stop the physical attacks, although the mayor strangely mentioned when he was hit in the head with a bottle that it’s just what he needed.

The rioters hate the Mayor and want his resignation

Rioters hate the cops…with their signature slogan spray painted on every flat surface in sight, “all cops are bastards”.  28 cops injured so far and three federal officers may be blind for life.

No regard for the law, fellow citizens or private property.  Do you really think they give a damn about George Floyd.  It’s an excuse to riot.

Mayor Wheeler lacks the spine or other anatomy to do anything

But he whines, incessantly, when President Trump takes action.

Yet she claims the authority to make your 5 year old wear a mask.

And the city burns.