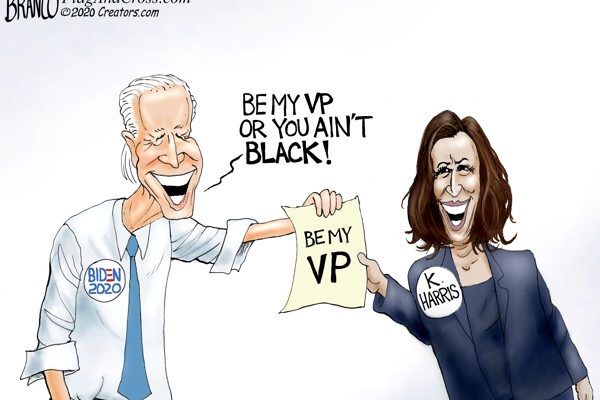 Can you imagine Joe Biden’s surprise when he learned who HE picked as his running mate?  He’ll probably be just as surprised when he learns it again, today.

Now imagine what he’d think if he knew Kamala Harris is actually running for President.

Which brings me to the 25th amendment and the rules it lays out for the removal of an incompetent President.

Given Crazy Joe’s comments lately, would everyone who thinks Biden can hold it together for a full 4 year term, please raise your hand?

If you vote the Biden ticket in November, you’re actually voting for President Harris.

The Senator who declared just last year she BELIEVES the women who claim ole Gropin’ Joe abused them.   I’m guessing the California Democrat won’t bring THAT up again.

The one who blasted Biden in a primary debate for backing racially segregated schools.  The one who had nice things to say about fellow segregationists in the U.S. Senate.

I’m sure Joe has a snappy comeback.  After all, he infamously told one black radio host  ‘If you have a problem figuring out whether you’re for me or Trump, then you ain’t black’.

Apparently, the Senator calculates backing a bigot is worth it if it puts her in the Oval office.

There’s more, just vote for me on your radio I’m Lars Larson

TheLarsLarsonShow · Lars Thoughts – If you vote for Biden in November, you’re actually voting for President Harris
Tweets by LarsLarsonShow