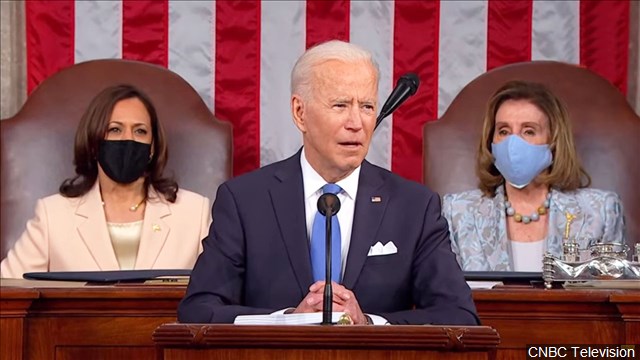 It helps you understand last night’s speech by a President installed after a flawed election in November if you remember his life history.

In politics he plagiarized speeches and even his life history from others and got caught.

So last night what did Joe Biden do?

He claimed “We’re vaccinating the nation”

Yes, a record speed vaccine development program and distribution plan his predecessor put in place before Joe even arrived.

Biden dodged responsibility for a crisis on our southern border that leaves tens of thousands of children locked up…and about 1-thousand illegals a day crossing into our country illegally.

He announced a plan to ban Americans from buying rifles and lied about the failure of the same ban a couple of decades ago.

Biden proposes roughly six trillion dollars in new programs and promises that it will all be paid for by taxing the rich…even though the math doesn’t add up on that claim.

If you’re worried that Joe isn’t telling the truth and you might end up stuck with the bill, you should be.

I just suggest you consider his history.  The lies have always paid off handsomely for the Biden clan…and not so much for the rest of us.