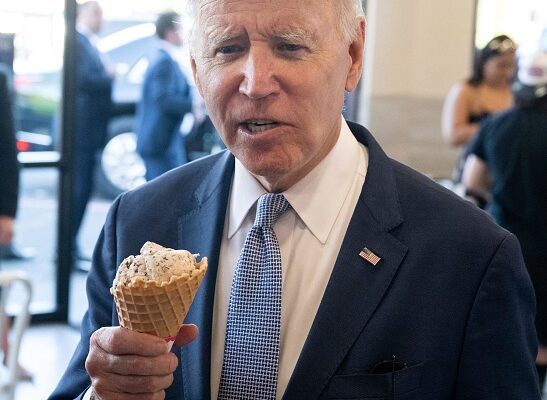 Most of us could blame “brain freeze” if we said something really stupid while eating ice cream.

But when Joe Biden stopped for his silly, trademark, two-scoop cone in Northeast Portland at Salt and Straw this weekend…we understand that his brain has been frozen for a long time.

Reporters asked Biden about the economy.

The President responded “Our economy is strong as hell”.

The average family of four would have to shell out more than 30 bucks for the sweet frozen treat Joe licked on.

That family has been paying five and six dollars for gas, who’ve seen grocery prices increase by double digit percentages.

An economy where mortgage interest rates soared from three percent this past January to more than 7 and a half, trapping a lot of people in rented housing.

Of course, Joe’s personal economy is doing fine…thanks to his grifter son Hunter who cut multi-million dollar deals with energy companies in Ukraine and China…with ten percent set aside for “the big guy”.

That’s why Joe Biden can stand there in Northeast Portland, eating a nearly eight dollar ice cream cone and declare the economy is “strong as hell”, right before he climbs back on that big airplane and flies off to his next ice cream stop…and his gas gets paid for by you and me.

You can read the story here: https://www.foxnews.com/politics/biden-tells-reporter-economy-strong-hell-while-eating-ice-cream-portland