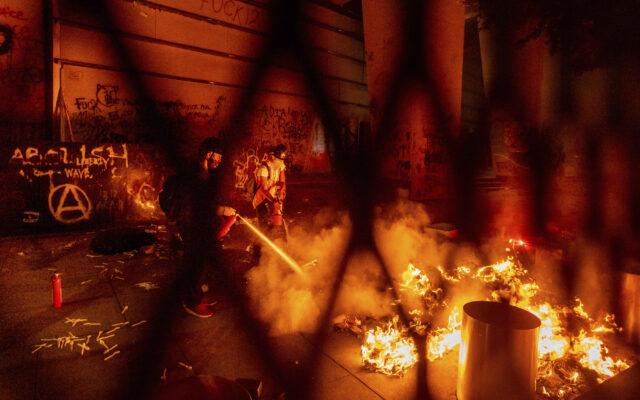 It seems arson is a crime that no longer gets you arrested if elected politicians like your choice of target.

Insurgents seeking the overthrow of the federal government  and its immigration agency first laid siege to ICE Portland three years ago, allegedly driven by then President Trump’s insistence on enforcing U.S. immigration law.

At that time, Mayor Ted Wheeler announced he would not remove the protestors because he agreed with their complaints that 2-thousand kids had been separated from their families.  Now, President Biden REFUSES to enforce immigration law and at least 20-thousand illegal alien children have been caged near the border.

And the protests have ramped up to arson, and since there were people inside the building Saturday night, attempted murder of federal law enforcement officers.

You’d think that would bring at least a few arrests… especially given that Feckless Mayor Ted Wheeler gets no political benefit from the crimes.  But police arrested no one.

I guess the Mayor wants to wait until someone’s blood actually spills before he acts.  Although that may be too much to hope for.

Violent crime has the city on track for a hundred homicides this year…and the Mayor’s answer is to cut the cops and put unarmed park rangers on the job.  So for now, wheeler’s policy seems to be “burn baby burn”