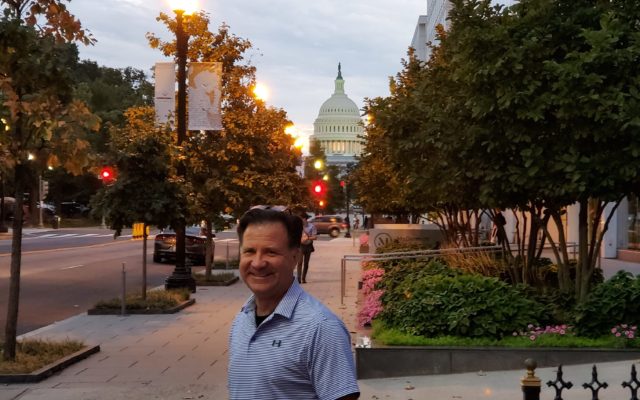 I woke up on Capitol Hill in Washington DC this morning.  Step outside and the big capitol dome is just a couple of blocks away.  Yesterday, the Alaska flight that brought executive producer Donovan Sargent and I to the Capitol also carried two members of Congress.  Democrat Suzanne Bonamici actually stopped me as I was getting off the plane to ask what brought me East. I told her it’s a desire to see America’s immigration laws enforced and if they need changes, to get the congress to go to work on that.  I told the Congresswoman that she’d be welcome on my show any time and she told me “I’ll talk to my team about that”. I thanked her. People in the NW should understand that Democrats hold the majority in the House of Reps and as such, they control whether new laws go anywhere.  But Democrats have spent the last three years opposing anything President Trump does. That’s not helpful. I also ran into Congressman Greg Walden on the plane. He’s in the minority in the house so he can only get things going that the democrats agree on. The majority party can’t seem to stop talking about Impeachment of Donald Trump…but even the late-night comics have noticed…they can’t seem to actually move forward with impeachment.  I think they’re like that little kid who’s standing on the diving board for his first time. He knows he will pay if he backs down…but he lacks the courage to take that big step forward. So he just stands there in his board shorts, shivering. Democrats could move forward with reform of the immigration laws…but they have made it clear they want no limits on the influx of millions of immigrants…and they know the voters will make them pay for that because it threatens every community they represent.

I’m here on Capitol Hill today to push for action by our members of congress…democrat Party or republican.  I’m joined by 75 other talk show hosts from around America who will interview representatives, senators, folks from the white house, folks who live on the border…and more.

Congresswoman Bonamici…as I told her in person yesterday, is welcome on my show any time she wants…and I’ll be on my best behavior…I promise.