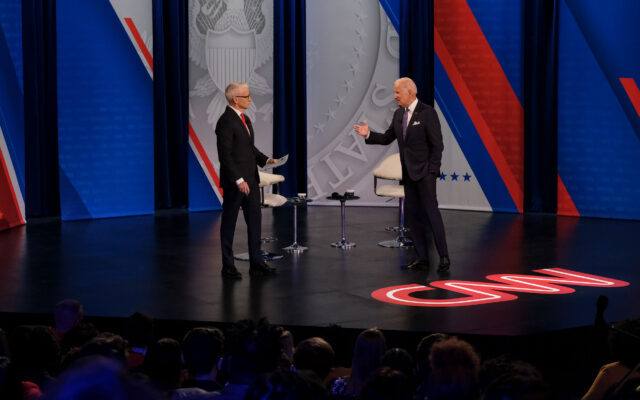 Joe Biden had quite a night last night.  The President hasn’t met with reporters to answer questions in almost three months.  So, his friends at the Chicken Noodle News Network cobbled up a town hall…with obsequious anchor Anderson Cooper to toss snowball questions.

Should all those cops get fired for refusing the experimental vaccine?

“Yes”, says Biden who promised for months he absolutely would NOT impose vaccine mandates.

But Joe went further.  He scoffed at the all American idea of freedom, (quote) “Freedom.  I have the freedom to kill you with my covid. No, but come on, freedom.”

Cooper must get a good paycheck from CNN to play this role.  He showed absolutely no skepticism when Biden claimed he had been to the border with Mexico…when we know he has NEVER been in all decades in office.  The President claims he hasn’t had time.  That despite the fact that Joe’s found time to go 20 times to Delaware, to his home and vacation home.

Cooper put up no resistance when Biden claimed that wages are up…even though inflation has wiped out all wage gains of American workers this year.

When the President was asked about the vote to banish the statue of Thomas Jefferson from the New York City Council chambers…he said, that’s a local decision.

And with gas prices in some parts of California nearing 8 bucks a gallon, Biden admits he has no idea how to get lower prices.

I do.  Bring back President Trump.