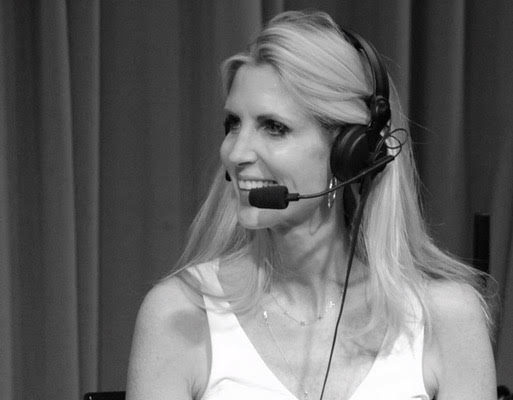 Ann Coulter is a political commentator known throughout the country for her quick wit, sharp tongue and strong stance on immigration.

View more from Ann Coulter at her website: www.anncoulter.com

;Never Trust a Liberal Over Three-Especially a Republican

Mugged: Racial Demagoguery from the Seventies to Obama

(September 2012); Demonic: How the Liberal is Endangering America (June 2011);Guilty: Liberal Victims and Their Assault on America (January 2009);If Democrats Had Any Brains, They’d Be Republicans (October, 2007); Godless: The Church of Liberalism (June 2006); How to Talk to a Liberal (If You Must)(October, 2004); Treason: Liberal Treachery From the Cold War to the War on Terrorism (June 2003); Slander: Liberal Lies About the American Right (June 2002); and High Crimes and Misdemeanors:The Case Against Bill Clinton (August 1998).

On August 21, 2018, she released, Resistance Is Futile!: How the Trump-Hating Left Lost Its Collective Mind

Coulter is the legal correspondent for Human Events and writes a popular syndicated column for Universal Press Syndicate.

She is a frequent guest on many TV shows, including Good Morning Britain, Yahoo News, HBO’s Real Time with Bill Maher, The Today Show, Good Morning America, The Early Show, The Tonight Show and has been profiled in numerous publications, including TV Guide, the Guardian (UK), the New York Observer, National Journal, Harper’s Bazaar, The Washington Post, The New York Times and Elle magazine. She was the April 25, 2005 cover story of Time magazine. In 2001, Coulter was named one of the top 100 Public Intellectuals by federal judge Richard Posner.

A Connecticut native, Coulter graduated with honors from Cornell University School of Arts & Sciences, and received her J.D. from University of Michigan Law School, where she was an editor of The Michigan Law Review.

Coulter clerked for the Honorable Pasco Bowman II of the United States Court of Appeals for the Eighth Circuit and was an attorney in the Department of Justice Honors Program for outstanding law school graduates.

After practicing law in private practice in New York City, Coulter worked for the Senate Judiciary Committee, where she handled crime and immigration issues for Senator Spencer Abraham of Michigan. From there, she became a litigator with the Center For Individual Rights in Washington, DC, a public interest law firm dedicated to the defense of individual rights with particular emphasis on freedom of speech, civil rights, and the free exercise of religion.