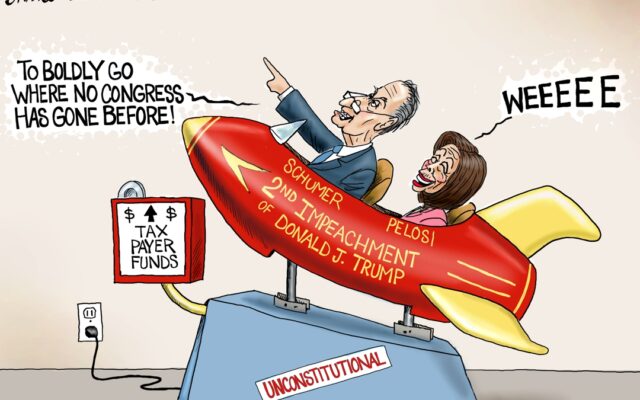 Day one of Presidential impeachment 2.0 tells us exactly where this is gonna go.

Some democrats shed tears on the floor of the Senate as they accused Donald Trump of inciting a riot with these words, “everyone here will soon (march) over to the Capitol building to peacefully and patriotically make your voices heard”.

Americans should fear a political party that seeks punishment for free speech…but that’s the democrats.

The Constitution says the Chief Justice of the Supreme Court SHALL preside over the impeachment trial.  In the law, SHALL means it must be done

Only this trial is of a private citizen…so Chief Justice John Roberts refuses to take part in this charade, because it violates the Constitution.

Instead, Vermont Senator Patrick Leahy acts as the Judge in this trial.  He’s also a witness to the events of January 6th. And he’s a “victim” in what happened at the Capitol building and he still votes as a member of the Jury.

Only 56 Senators voted yesterday to even say this hot mess is Constitutional.

They’ll never get 67 to convict.

So they may attack free speech…but this trial will deliver, sooner or later, a second full acquittal of Donald Trump.